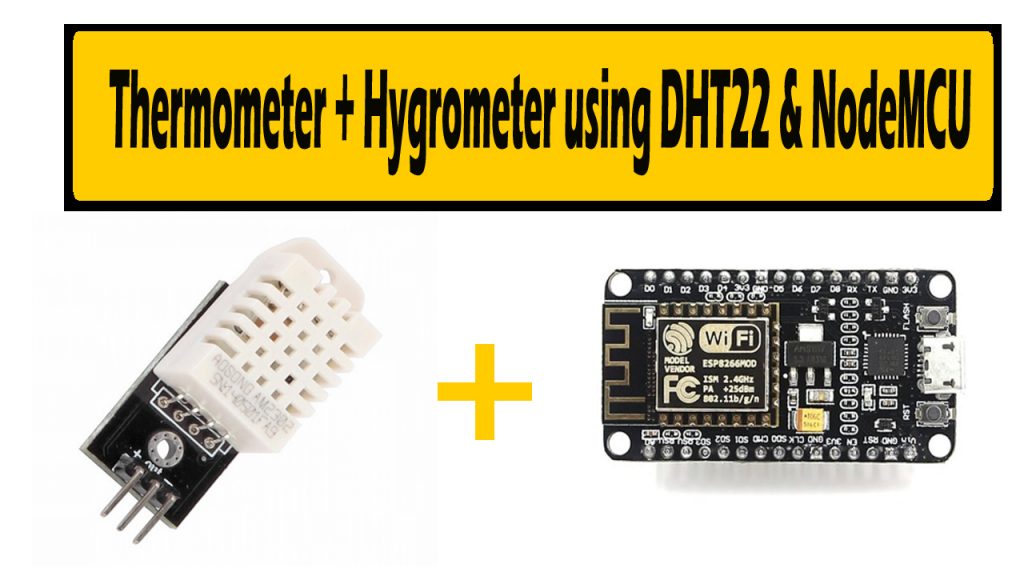 In this NodeMCU(ESP8266) Tutorial, I will tell you how to use the DHT11 or the DHT22 sensor for measuring temperature and humidity with the NodeMCU(ESP 8266). You can watch the following video or read the written tutorial below for more details.

These sensors are very popular for electronics hobbyists because there are very cheap but still providing great performance. Here are the main specifications and differences between these two sensors:

Ok now let’s see how these sensors actually work. They consist of a humidity sensing component, an NTC temperature sensor (or thermistor) and an IC on the backside of the sensor.

For measuring humidity they use the humidity sensing component which has two electrodes with moisture holding substrate between them. So as the humidity changes, the conductivity of the substrate changes or the resistance between these electrodes changes. This change in resistance is measured and processed by the IC which makes it ready to be read by a microcontroller.

On the other hand, for measuring temperature these sensors use an NTC temperature sensor or a thermistor.

The DHTxx sensors have four pins, VCC, GND, data pin and a not connected pin which has no usage. A pull-up resistor from 5K to 10K Ohms is required to keep the data line high. In order to enable the communication between the sensor and the Arduino Board. There are some versions of these sensors that come with breakout boards with a built-in pull-up resistor. They will have just 3 pins.

The DHTXX sensors have their own single wire protocol used for transferring the data. This protocol requires precise timing and the timing diagrams for getting the data from the sensors. which can be found from the datasheets of the sensors. However, we don’t have to worry much about these timing diagrams because we will use the DHT library which takes care of everything.

First, we need to include the DHT library which can be found from the Arduino official website. Then define the pin number to which our sensor is connected.  Create a DHT object. In the setup section, we need to initiate the serial communication to print the results. Using the read22() function we will read the data from the sensor. If you use the DHT11 sensor you will need to you the read11() function. In the end, we will print the temperature and the humidity values on the serial monitor.

We will be able to see the temperature and humidity on the serial monitor. once we upload the code.

One thought on “DHT22 with NodeMCU”